Test twice – use once.

Following the work on the end-fed wires in the back garden, the time had come to try them out on a summit. So with Jim VK2LC, Col VK2ZCO, Rod VK2LAX and Graham VK2GRA, it was off to Mount Elliot again. As I have said before, this is a very easy summit to get to but will probably be the only SOTA classified summit within 2 hours driving time for those living in the southern part of the NSW Central Coast. It has the advantage of many options to support an antenna – trees and bushes abound as do wide open areas where squid pole based antennas such as my 40m horizontal loop antenna can be erected as I did on my last visit here. This time however I was looking for the most simple of set-ups for the end-fed and found it in a small area of grass and bushes where I simply laid the antenna out, touching the plants between 1 and 1.5m off the ground. Jim had brought a tripod based vertical antenna along and local reports gave it about a 1 S-point advantage  which given its extra height is not surprising. That antenna wont fit in a trouser pocket as my full set of HF band end-feds will though.

The highlight of the day was hearing and then working Andrew on 40m SSB who was operating as VI100ACT from VK1/AC-018. He was a good strong 5-9 signal and came straight back to my call of just 5W into the end-fed antenna from the FT-817.

The “lowlight” if we can call it that, was that the the rig started cutting out. At first I suspected the use of the rig on the 20m version of the end-fed had caused this perhaps because of a bad VSWR but it turned out simply to be that the battery had discharged. I had forgotten to charge it up since its last outing and to add insult to injury, the rechargeable AA cell battery pack that I had brought along as backup was no better. It later turned out that 4 of the new 8 NiMH cells were faulty and not holding charge.

I can hardly believe myself how well the end-fed laid simply on bushes works – for the ultra-light QRP portable station, this is definitely my recommendation when teamed-up with a very small and light antenna coupling unit – I use the one that is part of the Chinese version of the Miracle Whip that I bought.

Here are a few pictures illustrating the set-up at Mt Elliot.

A short video is up on YouTube at – http://youtu.be/crvdx5xn98U 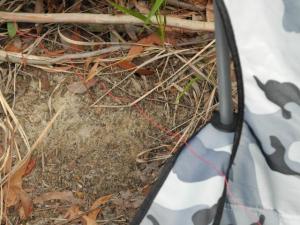 Wire antenna simply drapes over fence and into bushes. 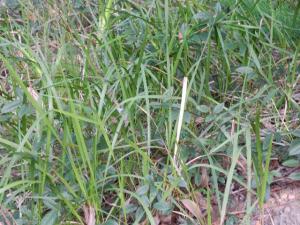 Antenna laying simply across the top of the grass.