Andrew VK1NAM/P posted on the SOTA reflector that he wanted some S2S contacts into Europe, including one into DL, so as I was happy that the small kit was working having used it a few days before on Zweisselberg, I offered to put the full kit together and head up to Peißenberg. I had already activated this summit earlier in the year so I wouldn’t get it’s 1 point added to my activators total however it is an easy access summit, where I know how I will install my gear. It’s also only about 40 mi nutes drive away from my home.

The last time I had used the “full pack” with my home built Ramsey QAMP, it had given me problems so before relying on it again, I decided to test it out and what do you think I found? It failed to work again. At least this time it was only two wires that had broken their solder joints from the switch I use to select the appropraite Low Pass Filter on the amplifiers output. The transistors seemed to be OK. After resoldering the wires to the switch, the second test showed the amplifier working fine on both 20 and 40 metres. So after checking all I need was packed and removing the items only used in the “small pack”, my camera bag and small rucksack were ready for a very early departure on Sunday morning.

Top row left to right: Tripod with SO239 mount, spare 2500 maH battery below it, FT-817 and Nikon camera sitting on top of painters sheet (thick plastic).

Peißenberg, or Hohe Peißsenberg to give it, its full name, sits above the village of Höhen Peißsenberg about half way between Weilheim and Schongau in upper Bavaria.

Checking on Google Maps I found that I would probably be able to cut about 15 minutes off my trip if I took some country roads to avoid going through Weilheim. This I did and the route was very clearly marked. I was nice to drive the small open roads across country and they actually let to the back of the mountain compared to my usual approach. In fact Google suggested I take some even smaller roads and approach the site from the rear, however I decided to follow the country road around to where it met the B472 and then access the mountain using Berg Strasse as I usually do from Höhen Peißenberg village. Perhaps I’ll try the really small roads next time.

I had arrived and set up all of my gear by 0640 UTC. The sun had risen and the views were amazing. The trip would have been worth it just for the views but I was there to try and get a contact with Andrew VK1NAM/P on 20m and soon after my arrival he spotted that he was calling CQ on 20m. When I tuned to the frequency I could hear nothing, but then after a while two weak Russian stations came up on frequency. I don’t know if Andrew could also hear them, but he changed frequency and spotted again. I listened again – still nothing. Then I heard Marek 4X4JU try a call to Andrew with no response (Marek was looking for the WWFF points rather than SOTA). Over the next hour between putting out my own CQ calls I kept listening for Andrew without success. I believe Marek heard something from Andrew at one point but the propagation was certainly not with us today. Added to the bad long path propagation, lots of stations came on both 20m and 40m around 0730 UTC taking part in some contest, so it became very difficult to find a free frequency to call on without having heavy QRM from adjacent frequencies or in some cases have a contest station simply grab your frequency without checking if it was in use or not.

In any case, I managed 15 contacts during the activation and got to test out the “full pack” set-up again, with the QAMP behaving itself this time. 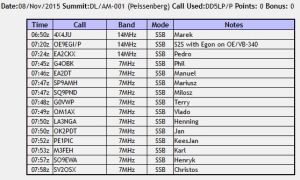 The propagation following the recent solar CME “glancing blow” are not yet back to normal but the late Autumn sunny weather made the activation a pleasure, even if an S2S contact with Andrew VK1NAM/P was not achieved.

The QAMP is working again and is probably due to be built into a better case (lets hope it still works afterwards!).