Following the tests on the previous Thursday (report on this website) all equipment was already decided upon and loaded in the car Friday evening ready for an early start on Saturday.

The trip down to Weichberg was again uneventful. Although the weather forecast was for a warm morning with sunshine, I decided to stick with my winter jacket and I’m glad I did as on arrival at the parking spot the car thermometer showed -1°C and even after 4 hours, with the car parked in the sunshine, it had only risen to +4°C. And… it’s foggy again as it was on Thursday. No time to complain as no one knows exactly when the band will open (or not), so it’s grab all the gear from the back of the car and head up the track to the summit, while at least it’s not raining!

The set-up is exactly the same as on Thursday – the tripod, 10m mast and 40/20m VP2E with the X108G on the picnic bench. Actually based on what I saw on Thursday, I brought an additional item. A bright yellow plastic shopping bag which I clipped with a peg onto the antenna wire as it went over the main pathway on the summit. While putting the antenna up, I found the metal guy peg that I had lost on Thursday!

Based on actions over the last few weeks I thought it would be best to start on 40m, then watch the MUF and when it rose over 14MHz switch to 20m. Usually the maximum usable frequency (MUF) shoot up after dawn but of late that hasn’t been happening, so it’s a question whether the MUF gets over 14MHz before the long path window closes.

I started at 0540 UTC (0740 local) found a free frequency on what was already a busy 40m band, spotted myself and then started calling CQ, only to have EC4AHH start calling on top of me. I announced the frequency was in use and I’m sure he heard me but he just kept continuing to call CQ. This DQRM action, just because he has more power is a bad trait in some operators. I was hoping some QRO SOTA Chaser might come along and move EC4AHH away from the frequency but it wasn’t to be, so I had to find another frequency rather than waste more of my time with this situation. On the new frequency, I got five calls (four of those S2S), before I was DQRMed again, this time from a Russian speaking station. 40 metres in Europe is becoming a real rat race!

Luckily at this point I saw via my smart-phone that the 3000 km MUF was rising nicely, in the direction of 14MHz, so I lowered the mast, opened the links and then up went the antenna again, now resonant on 20m. Tuning around the band was quiet but not for long, soon there were more and more stations on the band including a VK net booming in at 5-9+ – I tried a call but breaking into a local net in Australia with just 20 watts and a wire antenna from the other side of the world is a lot to ask and indeed it proved impossible. I looked around for a free frequency then spotted myself and called CQ. The first call came from Marat RA9WJV/P on R9U/SO-235 in Asiatic Russia! Following Marat, Juergen DK3SJ on holiday in SV8 (Greece) called and after breaking the contact, the conditions peaked and on a second attempt the QSO was completed. After that 20m quietened down again and only semi-local contacts were possible. Checking on the Internet – the 3000 km MUF had dropped below 14MHz again.

Here’s what happened to the MUF while I was on the summit and a little afterwards: 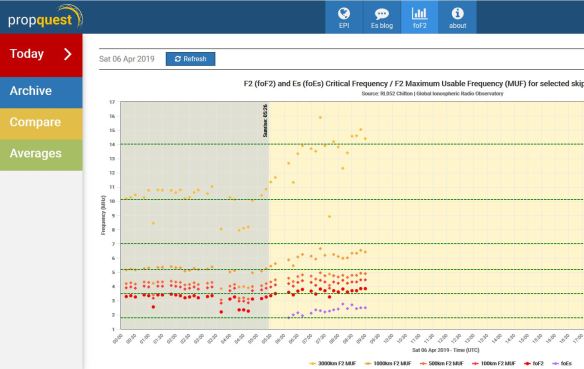 Looking at this had I stayed another 20-30 minutes, the MUF rose up over 14MHz again but by that time it is likely the long path window will have closed. So at the moment it looks like the time that contacts between Europe and Australasia are only 10 or perhaps 20 minutes long whereas those on 40m might be up to an hour-long. The problem for me is that for me to get via long path from southern Germany signals are weaker here than in northern Europe, possibly due to another “hop” for the signals being needed. Also chaser stations from Australia tend to have a beam on 20m but only a wire antenna on 40m. A comparison from this activation – a VK station on 40 metres was just copyable and probably not workable, whereas those on 20m were 5-9+.

A lesson learnt – for me to get a contact into VK with the current propagation conditions I need to concentrate on 20m and be on at just the right time. A difficult combination of requirements when operating from a summit.

This activation was not as successful as on Thursday with no contacts into VK. The extra stations on 40m didn’t help however even if there were less DQRMers on the band I think the signals would not have been strong enough to work in any case.

Equipment-wise I have a feeling that the 40m sections of the VP2E are resonant on the bottom of 40m but not at the top of the band, so some testing will be needed and most likely the 40m section of the antenna reduced in length, probably by wrapping the wire back on itself. This needs doing before my next activation using the antenna. Perhaps it can be done at the same time as measuring the directivity of the antenna?