A day of blockages, diversions and re-routing – but at least it was warm & sunny!

This activation was originally planned to cover 4 summits, the two 4-pointers listed in the title plus two other 2 pointers that were not too far away. Even at the planning stage, this looked like it may not be possible time-wise as access to Falkenstein and Zwolferkopf is via a single track road with sheer drops at the side which only opens in each direction at certain times to avoid traffic meeting each other with possible “unfortunate consequences”. I, therefore, changed my alerts the day prior to the activations to indicate that I was concentrating on the first two activations and one of the other two would only be attempted should I be well advanced time-wise from the first activations. This turned out not to be the case and that third alert got deleted from the second summit as it was not going to happen (it’s nice to be able to edit and delete alerts via the SOTLAS website now).

Falkenstein has limited space to set up an antenna and Zwolferkopf is a long steep walk from the road, so in both cases, I decided I would use my “rapid deployment” set-up using the loaded mobile whip antenna rather than taking a mast and wire dipole. While I was still thinking of activating the third summit, that one would have had the mast and dipole set-up, so that was also packed into the car.

In any case, a reasonably early start was planned and all equipment charged up ready to go on Sunday evening.

I woke to a nice looking day, (for a change). The gear was loaded into the car with two jackets, one for rain and cold and one for a warmer day. The trip down to Pfronten, where Falkstein is located above is about an hour and 10 minutes trip normally. However … at about halfway, there was a diversion because the road was closed, taking me way off my expected route and to make it worse as I approached Pfronten at the round-a-bout on the outskirts of the town, there was a barrier across my normal exit but with a sign saying that the road was open up until Meilingen, which is where I needed to turn off to head up the road to the castle ruins in any case. So for a change, I was lucky. I even arrived at the start of the single track road, while it was still in the phase for people to drive up the road!

DL/AL-167 Falkenstein: After parking in the car park at the top of the road I packed everything I needed into my new rucksack, including the Komunica HF-PRO-2 antenna in its protective tube on the side of the rucksack and set off up the road. At Falkenstein, there are car parks for the general public and for those staying at the hotel on the summit. The public car park is about 50 vertical metres below the hotel, so there is quite a walk up to the hotel entrance and then from there up to the castle ruins is probably another 70 vertical metres up a lot of uneven steps. On arriving at the ruins, the metal gate needs to be opened and then it’s up two sets of stairs in the wooden platform where I was glad to find that the small round table was still there.

This was the first time in a while that I had such nice weather on a  summit – as I hope the pictures show. After setting-up the photo-tripod, I re-assembled the vertical antenna from its three pieces and screwed it onto the tripod and last of all fitted the 8 radial wires to the bottom of the antenna socket. I have listed on the transport tube which I made for this antenna, the setting on the coil-slider for various bands  (15 for 40  metres for example) so I set the coil slider at 15 and went back to the table where I had my rucksack laid on. Opening the bottom section of the rucksack I have the rig, the battery box, the microphone, the smartphone which acts as the rigs display and control panel and a new coax antenna lead (this is a replacement for the one which created me problems on my last two outings) which the coax lead from the tripod was then connected to.

On turn on, I found lots of stations booming in. I searched for a free frequency but after not getting a reply to my question “is this frequency free”, spotting myself and calling CQ, I heard a station booming in, only 1 or 2 kHz away, making the frequency unusable. This happened time and again on both summits and on the second summit, I had at least one station deliberately causing QRM on my frequency – where is the mentality in that? In any case, once I got on a semi-free frequency the contacts came rolling in and I ended up with over 20 stations for this first summit in the log and it was now time to look at heading for the second summit. Remember that the single track road is open in one direction at a time so I had to get back to the car before the full hour to be able to drive down the road to the spot that I wanted to park at before setting off on the about 2-kilometre track to Zwolferkopf from about halfway down the road. Well again, it worked out well with me with everything packed in the car in the car park ready for the traffic light to turn green from red.

DL/AL-166 Zwolferkopf: On arriving at the start of the track which is about half the way down the single track road I found a place to park which was not too muddy and did not cause any obstruction, locked up the car and set off again with the loaded rucksack up the track. This is a summit where some care is needed. In places, it is not clear where the track goes but thankfully every so often you see there red/white/red mark on a tree or rock, to let you know you are on the track. We are following track E4 here but apart from the start at the roadside, the track number is not indicated en-route. So some fitness is definitely needed as well as no fear of heights as the track weaves it’s way first up the side of the ridge and then along the top of it. This time there was an added complication. From the high winds, we had about two weeks earlier several very large and tall trees had been ripped out by their routes and were blocking the track making it impassible in about four places. This meant some off-track excursions down and around the bottom of the tree or at least to a point where it is possible to climb over the tree or trees blocking the way. With a fairly heavy backpack – I estimate between 15 and 17 kilos – this made the journey “interesting” and longer than expected. When I eventually arrived at Zwolferkopf, which used to carry two SOTA IDs as it sits exactly on the German / Austrian border, it was time to have lunch. The views in the sunlight from this summit are also amazing

As I mentioned earlier, I seem to have been plagued by stations causing me  QRM and this summit is where I had one deliberately causing QRM by running a carrier for minutes on what had been a free frequency (In had checked and called) – there are some strange people in the hobby these days! I managed to copy some chasers through the carrier but after a while, I had to try to find a different frequency and it was on the third frequency that I had QSYed to that I eventually got the calls rolling into the log. I could have, of course just logged the first four contacts and then packed up but I realise that for many chasers this could be a new summit for them as it’s not activated that often. Most likely because of the problems of getting up that track. That being said, while I was there a young guy came up to the summit on a mountain bike! How on earth did he get that past the trees with the bike?

I had just one technical problem on this activation – when I put my hand near to the microphone socket while transmitting, the receiver started making strange noises. I presume this was RF feedback as I had experienced with the amplifier previously but at the moment, I did not have the amplifier installed!

Once I finished and packed up the antenna, tripod etc. into the rucksack, it was time to head down and try to get to the car at the right time to be able to drive down the hill. With no traffic lights visible where I had parked, it would be a matter of checking the clock. Quarter past to 5minutes to the next hour has cars coming up the road and from the full hour for 10 minutes has cars going down to the valley.

I thought as I had found my way around, over, under or through the fallen trees on my way up the track to the summit, it would be straight forward to reverse the process on the way back. It wasn’t and at one particular point where several trees were blocking the track, I was guessing as to how to get around the obstacle. Unfortunately, a couple who had been in front of me were now out of sight so I couldn’t see how they had got past the obstacle. My attempts at getting around the trees took me further and further down the side of the ridge with what felt just like leaves and branches and leaves underfoot. Eventually, I got past the bottom of where the trees were (this was definitely not the route I had taken on the way up the track!) and rather risk heading further down the side of the ridge to come out at a place I would not recognise, I clambered back up the ridge to the track, so that I could follow that back to my car. A lot of effort with the heavy rucksack!

It all worked out though, but through the lost time getting pat the fallen trees, I had missed the narrow, downhill time window for the road, so rather than wait, parked where I was, I decided to drive back up to Falkenstein and wait in that car park which has the traffic light and in fact went and sat in the park nearby in the warm (20 degrees C) sunshine and caught up with my emails until it was time to be able to head down the road again, this time all the way to the bottom.

Knowing my preferred route home had the blocked road, I took a different route home as recommended by my car Navi which took about 5 minutes less than my normal route.

All in all a successful day out. good radio, good exercise and sunshine! 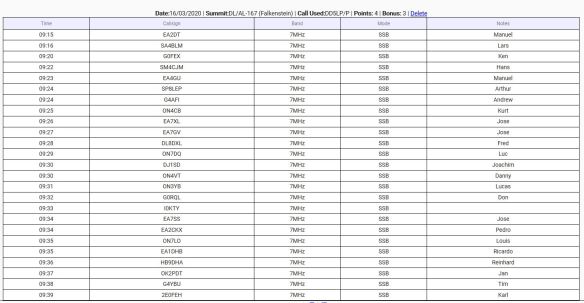